The new year has started with some great progress for the Much Haste to Igford! development team - though we have lots to do before we can sit back and relax.
It's been a while since we brought something visual to the table, so here's some of the latest in-game footage...
The Maxton Muycrosse Eighty-Eight has lost its roof since we last saw it, exposing its owner, Bernie Maxton, as she clatters around the chilly streets of Lumsden and Auchterlony in the Upper Igford Valley. How did this happen? Only Bernie knows, and she's not telling - just as well there's no such thing as a no-claims bonus on her car insurance in 1890.
Keep checking here and at the Igford Facebook Page for general Igford updates!

'Much Haste to Igford!' © Evil Corporation Games
Posted by Rich Morgan at 00:00 No comments:

From the ancient Igford archives...

Following an enjoyable talk with the 2nd Year BA Games Design students at Swansea Metropolitan University in their Level Design seminar last Friday, it was felt that some older Igford-related material should be shared with regards to the setting and environment of the game. 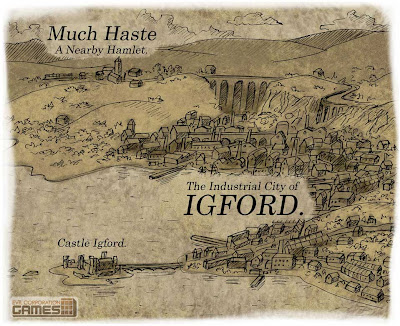 A representation of Igford (incorrectly titled here as a city - Igford is actually only a town) and the village of Much Haste on the Glencorwyn Peninsula in northern Caledonia.
The Igford Annual Steam Car Derby takes place on a number of point-to-point races throughout Glencorwyn, starting at the crossroads at Much Haste and ending in Igford town, which is where the game's title comes from. The race is - quite literally - from Much Haste to Igford.

The town of Igford, the Upper Igford Valley and Glencorwyn are much more sprawled and larger than suggested in the illustration above, which was produced as an initial visualisation way back in October 2009.

This image also features Castle Igford, the ruins of which stand on an isolated scrap of land just off the shore, connected by a very old stone bridge. Castle Igford was originally going to be a feature in the 2010 Igford demo but was removed after the project was scaled down. However, with recent developments it may be possible to finally take a steamcar trip to it... or through it - watch this space!

'Much Haste to Igford!' © Evil Corporation Games
Posted by Rich Morgan at 02:14 No comments:

The final Much Haste to Igford! playable character has been announced today: The Major! 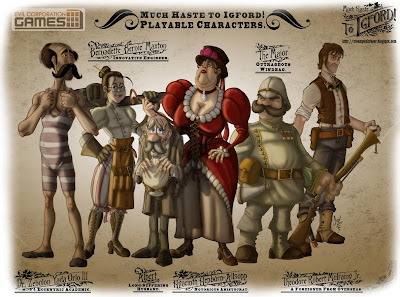 The Major: Outrageous Windbag
The Major (as he insists on being referred to) is loud, abrupt, and eager to share his stories of battle and exploration with anyone who stands still within earshot for long enough. He lives in an old inherited manor house on Highbrooke hill with his trusty (but utterly ineffective) guard dog, Sargeant. However, the Major can more often be found in the Ruhmkorff Inn in Lumsden, scrounging beverages from locals who aren’t clever enough to avoid him.

He talks proudly and frequently of his expeditions and exploits in Aikanaland, though many people who have heard his lengthy tales of improbable exploits wonder if he has ever been – and question if Aikanaland even exists.

Keep checking here and at the Igford Facebook Page for general Igford updates!

'Much Haste to Igford!' © Evil Corporation Games
Posted by Rich Morgan at 08:06 No comments:

Due to some entirely necessary time-travel experimentation and some of the Igford development team having to make an unavoidable last-minute expedition to the colonies, this week's scheduled Character Update will be delayed by approximately another seven days.
Do not despair, citizens of Caledonia! Keep your wireless or telegraphic devices switched on to receive future Igford updates!

'Much Haste to Igford!' © Evil Corporation Games
Posted by Rich Morgan at 04:05 No comments:

Another Much Haste to Igford! character has been announced today: Albert! 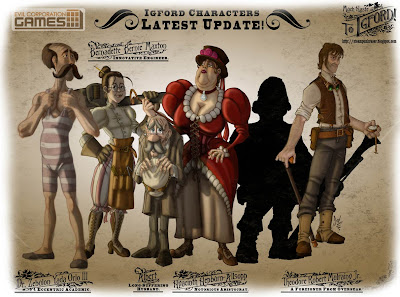 Albert - Long-Suffering Husband
Albert is Hyacinth Hepburn-Allsopp's mild-mannered husband, a timid man who has aged beyond his years due to the strain of being married to his overbearing and demanding wife.
A reasonably successful man in his youth, Albert inherited the Hepburn & Sons Engine building company from his father in Callaburgh and enjoyed a comfortable life, eventually meeting his wife-to-be and promising her a life of leisure.
With his carefree and comfortable life now a distant memory, Albert has become little more than a chauffeur and source of income for Hyacinth - and is expected to do his duty by his dominant spouse to drive her custom-built steamcar to glory in the Igford Annual Steam Carriage Derby - by whatever means are necessary.
Keep checking here and at the Igford Facebook Page for further character and general Igford updates!

'Much Haste to Igford!' © Evil Corporation Games
Posted by Rich Morgan at 12:56 No comments:

Another Much Haste to Igford! character has been announced today: Bernadette 'Bernie' Maxton! 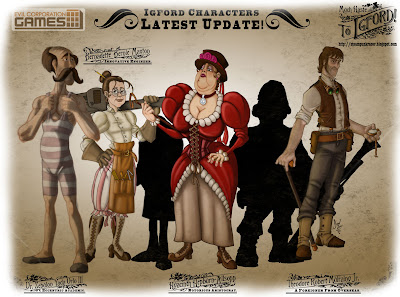 Bernie Maxton - Innovative Engineer
Bernadette Maxton, better known as ‘Bernie’, is a focused and determined amateur engineer with a fascination with steam technology and engines. She is very much an independent and unconventional person who does not adhere to Caledonian social expectations for a lady of her age and is supported, somewhat surprisingly, by her partner Oscar Samuel Muycrosse to maintain this individuality.

With the help of Oscar she has spent the last two years building the Maxton Muycrosse Eighty-Eight, her very own steam car to compete in the Igford Annual Steam Car Derby. The Maxton 88 (as it is more commonly known) has become a familiar sight on the winding cobblestone roads of Lumsden and Aucherlony. She is often preoccupied and distant, lost in her own world of constant improvement and refinement of machinery - particularly her own steam carriage.

By winning the Igford Annual Steam Carriage Derby with her own hand-built vehicle, Bernie hopes to justify herself as a competent engineer in Caledonia’s male-dominated engineering industries, enabling her to make her mark in the Empire’s age of invention!

'Much Haste to Igford!' © Evil Corporation Games
Posted by Rich Morgan at 08:24 No comments:

Another Much Haste to Igford! character has been announced today: Theodore Robert Mulrainy Jr! 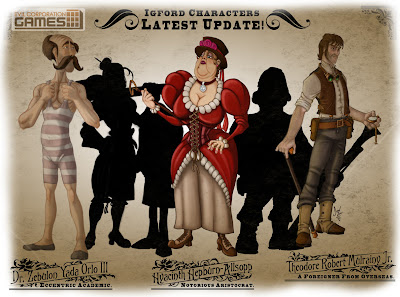 Theodore Robert Mulrainy Jr. - A foreigner from Overseas
Theo hails from Carcharbro, one of Caledonia’s most distant colonies in the southern hemisphere and fancies himself as a bit of a rogue and hustler. Essentially a well-intentioned conman, Theo’s line of ‘work’ causes a slight internal conflict which shines through on occasion, allowing him to occasionally do the right thing in a crisis. However, he does succumb to temptation all too easily and is known to spend a lot of time indulging in his many vices in the more notorious areas of Igford such as Doxel and Maggleworth.

His inability to turn down a wager has resulted in the young Carcharbran creating some substantial debts among Caledonia’s less reputable inhabitants, forcing him to live a life on the run from a growing number of impatient debt collectors.

Despite this, in a move borne either out of reckless habit or sheer desperation, Theo has entered the Igford Annual Steam Carriage Derby, placing a bet that he can effortlessly beat all the other entrants. If Theo wins the derby or not, one thing is for sure - he won’t have to worry about his gambling debts for long...

Keep checking here and at the Igford Facebook Page for further character and general Igford updates!

Just a reminder to all followers of the Much Haste to Igford! Development blog - we are moving with the times (like any good crackpot inventor or alternative 19th-century reality citizen would) and you can find us on Facebook! 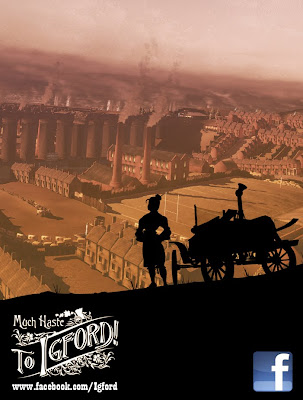